DJI is the world’s leader in commercial and civilian drone industry, accounting for over 70% of the drone market. Its drone technology has been used globally for the music, television and film industries, including K-pop music videos and the sets of Emmy Award-nominated television productions such as The Amazing Race, American Ninja Warrior, Better Call Saul, Game of Thrones, and many more.

In 2017, DJI won a Technology & Engineering Emmy Award for its camera drone technology, which was recognized for excellence in engineering creativity, providing directors and cinematographers an affordable and accessible platform to create low-altitude aerial images, opening up creative possibilities and facilitating the distinct looks of some TV shows.

A Quick Look At DJI

Wang, who hails from China’s Zhejiang Province, went to Hong Kong in 2003 after enrolling for a degree course in Hong Kong University of Science and Technology (HKUST). Two years later, the university granted him HK$18,000 (US$2,300) to conduct research and develop a drone. Wang founded the company in 2006 from his dorm room at HKUST.

DJI’s name stands for Dà-Jiāng Innovations, but it used to mean Dà-Jiāng Sciences.

DJI manufactures a range of products including unmanned aerial vehicles, flying platforms, flight controllers for multi-rotors, helicopters accessories, aerial and handheld gimbals and ground stations. These products are intended for amateur as well as professional use.DJI product is sold directly on DJI’s website as well as through authorised DJI Dealers around the world. 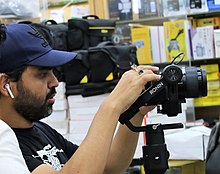 The Ronin is a standalone ground-based camera platform developed for cinematography and aerial filmmaking in professional environments. It is built for professional videography and photography and targets the film industry. By using three individual motors, Ronin stabilises when moving vigorously. Later models of the Ronin include the Ronin M and the Ronin 2.

DJI offers several add-on modules for their base products such as power management and video modules.

The Flame Wheel series are multirotor platforms for aerial photography. As of 2016, there is the hexacoptor F550, and quadcoptors F330 and F450. The most recent is the ARF KIT.

The Phantom series are DJI’s consumer flagship quadcoptors. They are currently the most popular product, and since launch, have evolved to integrated flight programming with a camera,  Wi-Fi or Lightbridge connectivity, and the pilot’s mobile device. Phantoms are made for aerial cinematography and photography applications, but are also used in recreational use.

There have now been four generations of the product line, each increasingly more capable. The most recent one is the Phantom 4 Advanced, announced on April 18, 2017.

The Mavic  series currently includes Mavic Pro and Mavic Air, both have foldable design that allow drones to be transported more easily.

The Mavic Pro is introduced on September 27, 2016. It features multiple redundant sensors and obstacle avoidance to help prevent crashes.

The Mavic Air was announced on 23 January 2018, for release on 28 January. It is marketed as a smartphone-sized drone that can fit in a jacket pocket.

It features a 12 MP 4K HDR camera, mounted on a 3-axis gimbal, and has a new panorama mode, which stitches together 25 photos in eight seconds to create a “Sphere Panorama”. Due to antennas mounted on its landing gear, the drone has a 21-minute flight time and a 2.5 mile range. Like the Spark, the Air also features the “Smart Capture” mode, in which the drone can be controlled by hand gestures.

The Spreading Wings series are mainly industrial UAVs for professional aerial photography, high definition 3D mapping, ultra light search and rescue, and surveillance etc. based on camera gear on board. In 2013, two models have been released: S800 regular and EVO.

The Inspire (悟) series is a professional series of camera quadcopters similar to the Phantom line, but including more high-end and professional features including an aluminum-magnesium body with carbon fibre arms, and detachable props on the Inspire 2. Presented in 2017, the Inspire 2 can be equipped with a 6K camera that is capable of capturing up to 30 FPS.

The Matrice series are designed for industrial applications.

The Matrice 100 is a fully programmable and customisable drone, launched on July 6, 2015. It has expansion bay and communication ports, which allows developers to add additional components for different purposes.

Matrice 200 series is a range of weatherproof quadcopters from DJI announced in February 2017.

They are designed for industrial applications, including surveying, inspection, search and rescue and firefighting.

The highest spec of the series is the Matrice 210 RTK, which features Real Time Kinematic technology, allowing for precise Geotagging of images captured from the quadcopter.

The Matrice 200 only supports a single camera, mounted either below or above the drone.

The Matrice 210 and 210 RTK add the ability to mount 2 cameras to the drone, allowing multiple sensors to be used simultaneously.

A DJI Spark with its controller and an extra battery

Released in May 2017, the Spark was designed to be an affordable consumer drone, that is nevertheless capable of producing high-quality images and video. This drone is DJI’s cheapest to date and features a 12-megapixel camera capable of shooting 1080p video at 30fps mechanically stabilised by a 2-axis gimbal. The Spark also carries an advanced infrared 3D camera that helps the drone to detect obstacles in front of it, as well as facilitating hand-gesture control—a feature that was, until the release of the Mavic Air in January 2018, unique to the Spark.

The Spark can be controlled through your smartphone App or a bought DJI controller, which increases the range to 1.2miles (2km). The aircraft has a flight duration of up to 16 minutes, but its exhausted battery can easily be swapped out for a charged battery to extend flight time.

There have been multiple complaints that the drone could switch off and fall while flying. DJI responded to this by releasing a mandatory battery firmware update in August 2017.

The Osmo camcorder is developed by DJI. The camera uses a smartphone to view camera footage and can record 4K and take either 12–16 MP stills. The camera is interchangeable, with the Zenmuse X3, X3 Zoom, X5, and X5R gimbals compatible, and uses the FM-15 Flexi microphone.

Similar to the Osmo, it instead relies on the user’s smartphone as the camera. Most smartphones are accepted into the gimbal with a width range of 2.31–3.34 inch (58.6-84.8 mm). The original Osmo Mobile has reached its end-of-life and has been replaced with a second generation.

Announced after CES, the DJI Osmo Mobile 2 is the successor to the original Osmo Mobile. Still reliant on a smartphone camera, the Osmo Mobile 2 was a refinement adding multiple shot modes and increasing the battery life to 15 hours. The Osmo Mobile’s gimbal position for portrait mode is perfect for your Instagram Stories.

The DJI Goggles have a comfortable design for FPV flying with DJI products. They combine a pair of screens, wireless connectivity, and direct control of photo and video capture. In November 2017, DJI presented a new, so-called ‘Racing Edition.

Related Articles
We will be happy to hear your thoughts

Drone Latest
Recent Posts
About Us

We live and breathe engineering here at home in the Drones-Eyeview.com community. All our information posted would have aided us at some point on our Drone Journey.

Drones-Eveview.com is a participant in various relevant affiliate programmes. An affiliate advertising program is designed to provide a means for sites to earn advertising fees by advertising and linking to helpful items.

In simpler terms, we get a small commission when you buy a product through an associated site. The price is the same, never more and sometimes less through our advisory links.

Links on this site are  for your information and the majority have no affiliation.